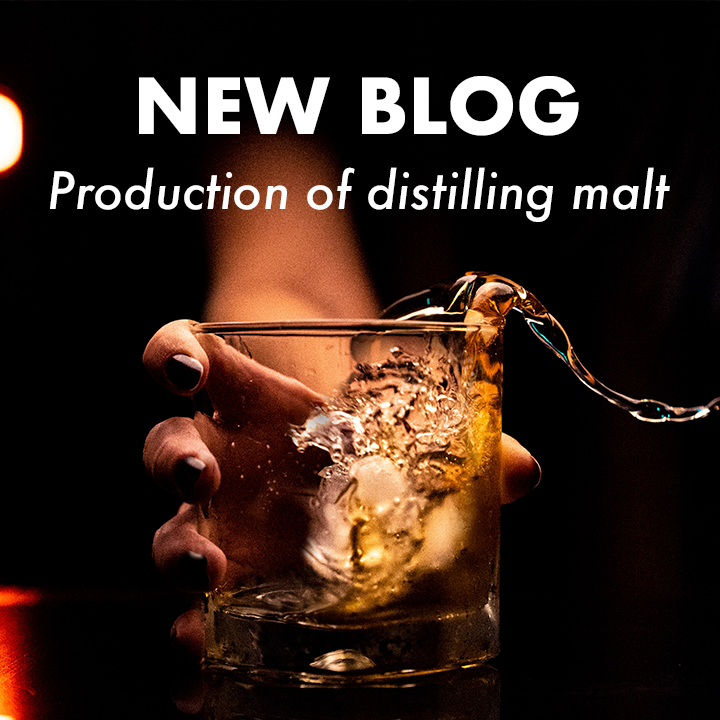 I was surprised to find out that a quick scan on internet could not tell us how (single/malt)whisky is produced. As a malt producer it is important to understand the details of that process in order to deliver the best suitable quality. I only discuss single malt distilling as the preparation of the wort for grain distilling is somewhat more complex as the starch of the used grains is not modified by malting. Furthermore only a small amount of malt (7-15%) is used for conversion in grain distilling.

This is of course the main production in Scotland where it is obvious that the local ingredients were responsible for the way whisky was and still made: local barley (it is the cereal which can bare the difficult growing conditions in Scotland), local peat (the fuel for heating and kilning) and the alembic or pot stills (a distilling device coming from the Irish neighbours).

The classic wort production uses very well modified distilling malt with low protein level (max 10%). Two reasons: lower protein deliver higher extract and proteins are contaminating the burner coils in the stills . Crusted malt is mixed with hot water entering the mash tun to achieve a mashing temperature of 63°C. The ideal maximum activity of ß-amylasis. A rake is mixing the mash and after half an hour one start draining off by decantation. To wash out the rest extract hot water is added in 3 sparges, the last one at 90°C. The wort is cooled down to below 30°C and collected in the wash tun for fermentation.

Because the first (main)wort runs off at 63°C and the wort is not cooked as in the beer process but only cooled down, amylase activity continues in the wash tun (fermentation). During a couple of days a wash of aprox 10 to 15% alcohol is obtained. Tanks to the still limited activity of the amylase enzymes almost all amylose and amylo-pectine has been converted to fermentable sugars. Yeast used for fermentation is often a mix of own raised specific yeast mixed with yeast used for brewing and even baking.

As in the picture below, the concentration of alcohol happens in minimal 2 distillations. 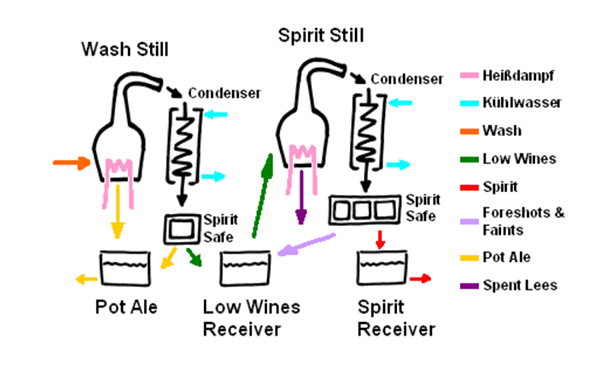 Main goal is to reduce volume and contrate alcohol. The heavy boiling gets beside alcohol and water also heavy fusel oils.

Purification of the low wines happens in the next step and in the spirit still. According to British law all piping and pot stills have to be padlocked. This makes it impossible to check organoleptic control on flavours and alcohol by the stillmen. Therefore a lot of measuring is happening in the spirit safe, no tasting is possible. There is only a certain window in the distilling process suitable for further spirit collection (the middle cut). The first condensate in the beginning of the distillation (foreshots) contain a lot of aldehydes. The middle cut is what the distiller wants as crude spirit. At the end of the distillation the fusel oils evaporate. Both fusel oils and foreshots are lead back to the low wines receiver in order to re-process and recuperate the alcohol.

The distillation of the middle cut must happen very carefully and slowly in order not to transfer the fusel oils. Once the distillation is finished the raw spirit is maturing in wooden cask. To called it whiskey the spirit has to stay at least 3 years on barrel (red label – 12 years black label). The whiskey is taken the colour from of the casks and also certain aroma’s . A lot of used sherry casks and used bourbon casks are popular for maturation. Together with the amount of peat used during kilning, the shape of the stills, the casks and the phenol content define the final whiskey: Low peated whiskey’s (e.g. Highland 0-3 ppm phenol) ; high peated whiskey’s (Islay 30 ppm phenol and above)

Distillation of alcohol (whiskey) can be problematic. Certainly in combination with copper distillation devices. In growing barley (during malting process) EPH (epi-hetero-dendrin) is formed in the acrospires. This GN (glucosidic nitrile) is forming measurable cyanides during distilling which are causing the formation of ethyl carbamate in whiskey (cancerogenic). The last 40 years the whiskey industry is using only malt from barley varieties which are no longer producing EPH. That is why we have, apart from malting barley’s suitable for brewing, also malting barleys suitable for distilling. Best known are LAUREATE, CONCERTO and ODYSSEY; luckily also very good brewing varieties.

In order to have specific catalytic reactions during distillation whereby copper is essential it is necessary to have an extra device (doubler) if one uses a stainless steel column stills. With a column still it is possible, even in one step and/or in a continuously process to make almost pure alcohol (96%). This is not possible with a pot still: it is batch related process and max 70% alcohol content in the final spirit can be achieved. Because of this, believers of the pot still claim to have more aromatic spirits and believe the choice of malt types could therefore be more explicit.

In general it does not matter if one uses pot still or column stills, it is the distiller who has to make the cuts.

In the picture below a range of worts from speciality malts are produced in order to define their taste and aroma. The use of these malts in strong alcoholic beverages is rather new and mainly used in craft distilling production. 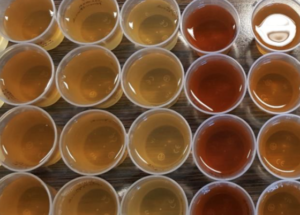 The results on mid and long term (long maturation) are not known very well. Immediately after distilling the spirits are tasted and evaluated. On basis what has been found, the distiller will make new compositions which he will try out and evaluate again.

It gives the distiller other opportunities then only phenol from peat and wood from the casks to spice his alcoholic beverage. Below a spider diagram which can help to make choices. The example shows a strong roasted malt tasted as such (which is mostly very hard) and 2 blends with regular base distilling malt at 2,5% and 5%. The small amounts do not cause difficulties in processing the wort but even at those small concentrations the distiller can expect some strong influences. It is to him to get it in the spirit. 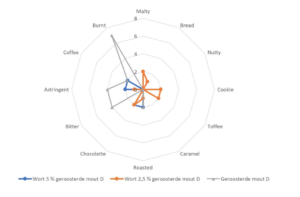